The unauthorised guide to project managing your way out of trouble…

If I was famous and I was being interviewed about seminal influences on my life, then I would have to talk about Steven Moffat. Steven Moffat is basically responsible for my career. Long before Benedict’s Sherlock and David’s Doctor Who, Steven Moffat was writing the best children’s programme on TV about a bunch of teenagers who ran their own newspaper, led by the brilliant, bullish, and frankly slightly nightmarish Lynda Day. This was ‘Press Gang’ , and Lynda Day was my #1 hero. Not because I had any interest in journalism, or a lifetime ambition to edit a newspaper, but because she was awesome, and she was in charge. Being ‘in charge’ appealed to me a lot. I didn’t have any particular preference what I was in charge of, just as long as I was the one calling the shots. It’s no surprise then that rather than aspiring to be an astronaut or an actress, I decided at an early age that I wanted to live in London, wear a suit and high heels, and tell (‘advise’) people what to do. I got my wish, and just as I was settling nicely into those super smart stilettos, cancer came along and put me on a compulsory career break. 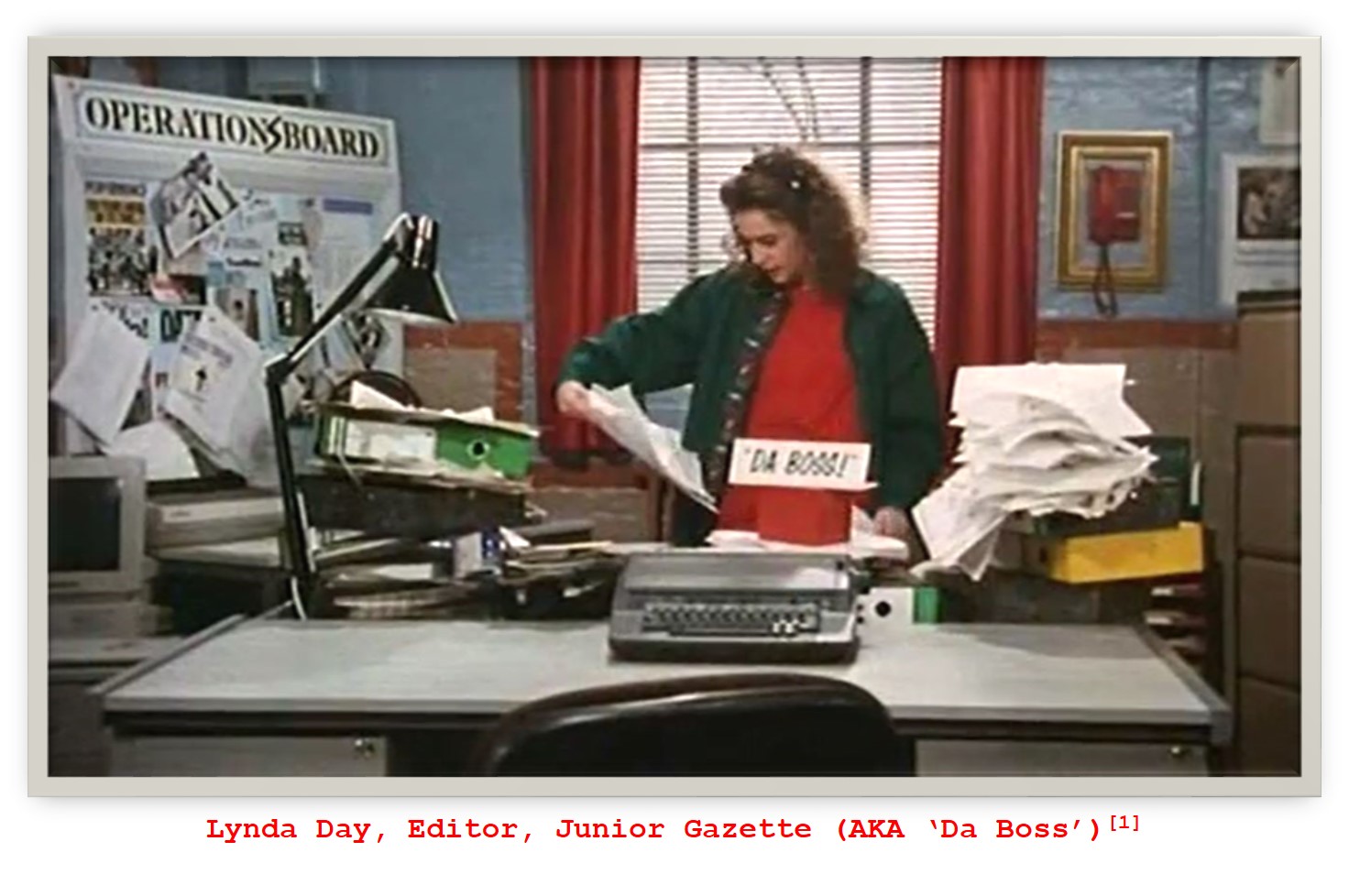 Managing stuff is what I do. It’s my specialist skill. So when cancer hijacked my life I felt like David Beckham waking up one day to find both his legs in traction and his pretty face covered in pimples. Here was a shock development that I didn’t plan for, didn’t really understand, and was basically powerless to do anything about. For someone who has spent a lifetime wanting to be ‘in charge’ this did not sit particularly well. But I rapidly concluded that if this process was anything then it was ‘Project Emma’. Everything, and everyone, was working in pursuit of my good health. And every successful project needs a superstar manager; every F1 team needs a Frank Williams. There is only one woman for this job and she’s spent her whole life in training for this kind of challenge – someone pass me a pair of my finest, fiercest power shoes, because here is a Project with a capital ‘P’, and it’s got my name written ALL over it.

We’ve got something to do. Probably the biggest thing we’ll ever do. And your co-operation is more than appreciated, it’s compulsory – Lynda Day, Press Gang

A successful project is all about the 3 ‘P’s – People, Plan and Process:

1) People
Rubbish managers think they are brilliant at everything. Brilliant managers know they are rubbish at most things, so surround themselves with people who better than them, and equip them with everything they need to be brilliant. The first and most critical task of the Patient Project Manager is to define your dream team: 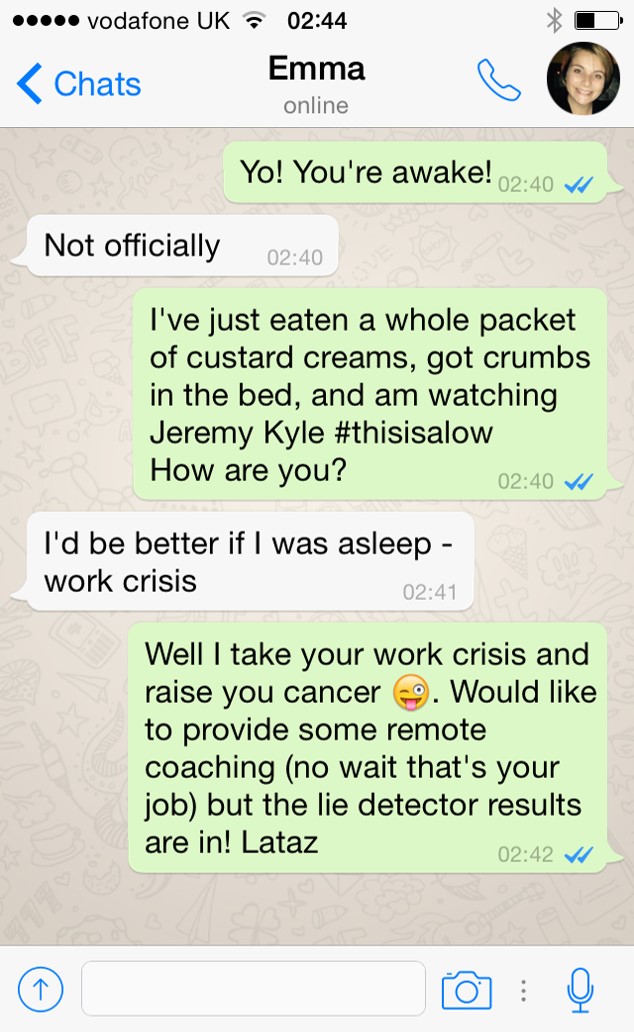 Inside of a ring or out, ain’t nothing wrong with going down. It’s staying down that’s wrong – Muhammad Ali

2) Plan
First you have to define the scope of the project (i.e. extent of the issue and treatment plan to fix it), and then the key tasks and timeframes. However, the first rule of this plan is that there is no plan. At least not one you can stick to with any level of rigidity; this is more of an aspirational ‘guide’ subject to a high degree of uncertainty and risk of unforeseen eventualities. Like Arnold Rimmer’s revision timetable, you will likely spend so long replanning the plan, that you may find it difficult to squeeze in the tasks required to actually execute the plan. 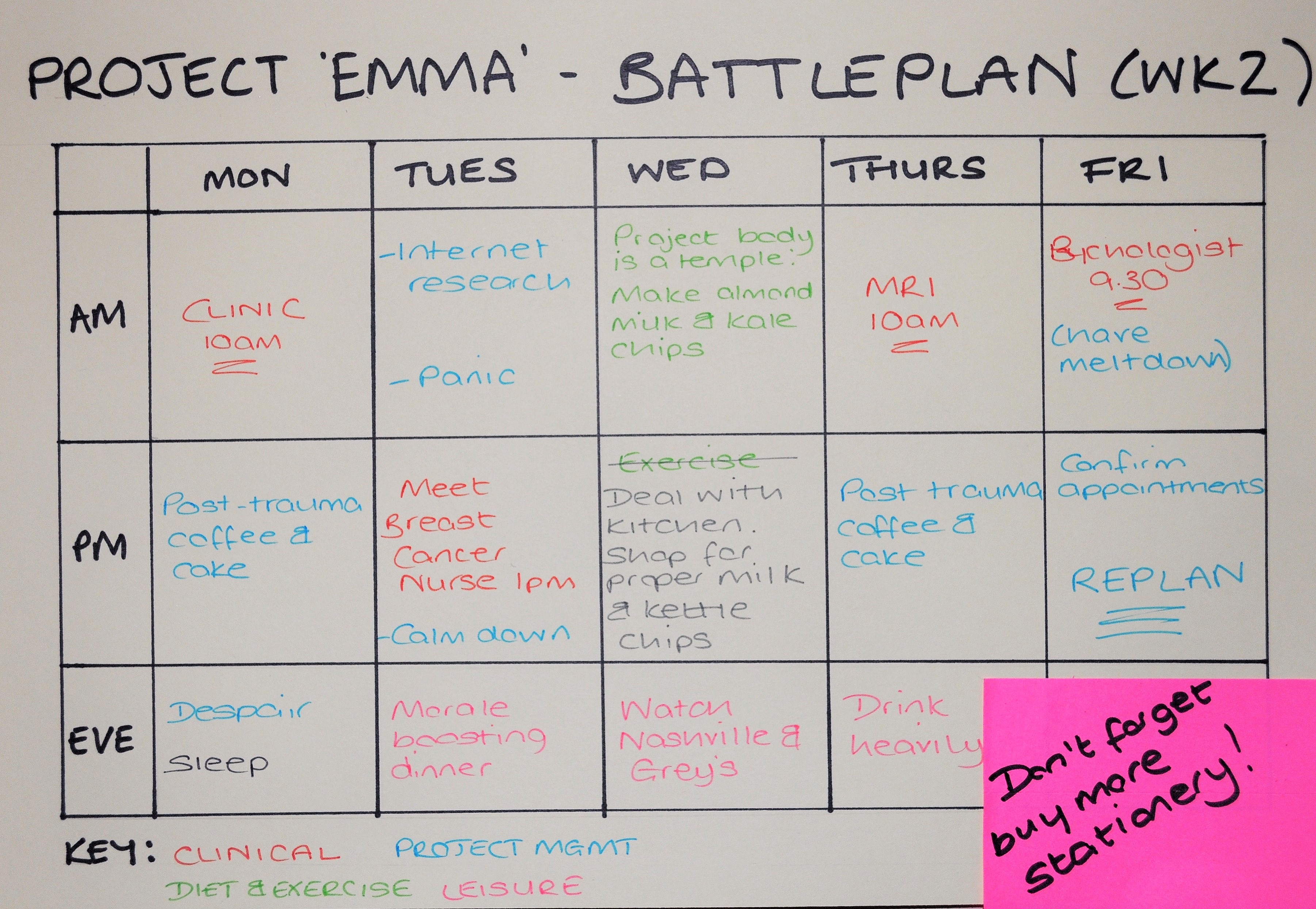 3) Process (i.e. doing stuff)
Successful project management is as much about appearing like you know what you’re doing as much as actually knowing what you’re doing. Hence you nod sagely and say with absolute authority “Absolutely. What we need here is a replan, and we need it yesterday”, when really you have absolutely no bloody clue what just happened, what needs to happen next, or where you left your house keys. Once you’ve got your people and plan in place then it should just be a question of making stuff happen. Simples. Except this is a relatively specialist subject, so you need a crash course in cancer jargon to protect your reputation and ensure you at least look like you know what you’re talking about.

“I’m not responsible for everything. I just make it look that way.” – Lynda Day, Press Gang

View image | gettyimages.com
Yes, but can you do the ‘Downward MRI’?

*Partial selection focusing on diagnosis; other key terms will be explored in future posts.

Lynda : I’ve had my day off now. Can I come in?
Kenny: It’s still the morning.
Lynda : I got up early.
Kenny: Look, Lynda, make the effort. Relax.
Lynda : Have Spike wrapped and delivered. I’m bored

The authorised and comprehensive guides: